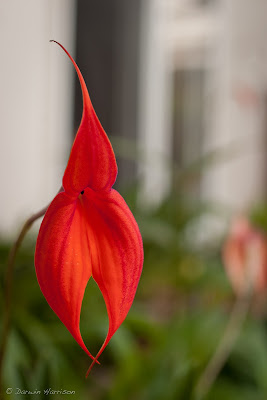 Masdevallia veitchiana, known as 'The King of Masdevallia's, is a brillant orange species from the mountains of Peru. It is said to have been cultivated by the Incas centuries ago, and is still a national treasure. It can still be found growing in mossy rocks around Machu Picchu. In Peru the plant is known as Gallo-Gallo, meaning "rooster". The flower has tiny purple hairs which give off an iridescent glow from different angles. The neon orange and purple are colors rarely seen in nature. 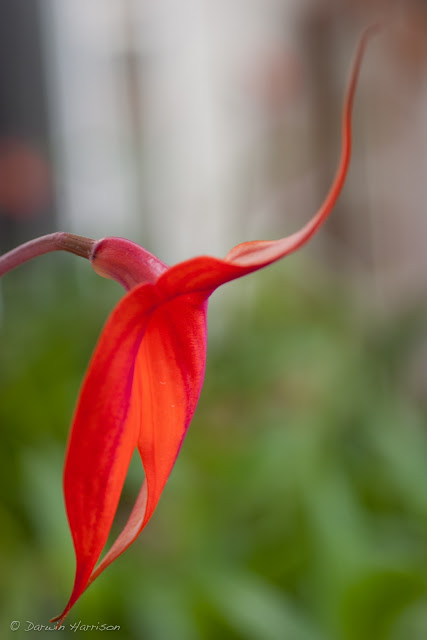 The plant was named after Harry Veitch, who's family ran the largest group of nurseries in Europe during the 19th century. Veitch's plant hunters gathered species from all corners of the globe, and this wonder was returned to him in 1867. He also helped establish the Chelsey Flower Show, perhaps the most famous flower show in the world. The drawing below was done by Walter Hood Fitch, a Scottish botanical illustrator who produced thousands of  images in color lithograph. I love old botanical drawings. 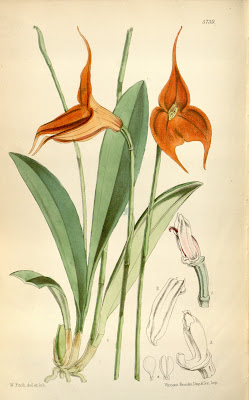 Posted by Darwin's Orchids at 9:44 PM

Email ThisBlogThis!Share to TwitterShare to FacebookShare to Pinterest
Labels: Masdevallia

Darwin's Orchids
Welcome. Orchidaceae is one of the largest families of flowering plants. There is roughly 25,000 species found in 880 genera. The number of orchid species equals more than twice the number of bird species, and about four times the number of mammal species. Some blooms last a day, and some can last up to 9 months. Here, I will document the orchids blooming in my life. If you are interested in purchasing orchids visit us at Florali in Walnut Creek. 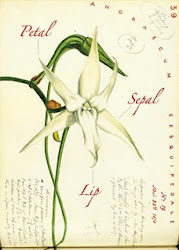